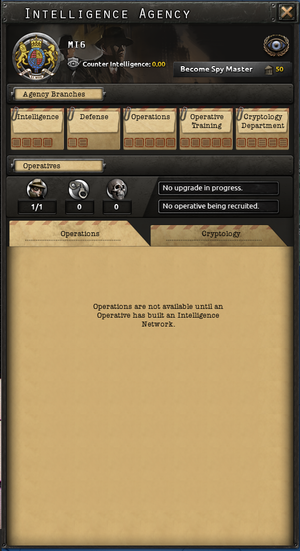 Main screen of your intelligence agency, where you can upgrade your agency, choose operations or decrypt enemy's ciphers.

Operatives are your agents working in the field under your agency. They can perform different missions on map or conduct operations. You gain one operative when you set up your agency, and an additional operative after five agency upgrades. You can get additional operatives from advisors ("Illusive Gentleman"), via national focus or from being the spy master of your faction.

Operatives can perform various missions on the map. The strength and impact of a mission generally depends on the size and strength of your spy network.

Operations become available to you after sufficient intel network has been established in the target country. All available operations can be found under the "Operations" tab in your Intelligence agency.

Cryptology strength can be described as a defensive stat for your ciphers, while Decryption power is your offensive stat.

Every day, your Decryption power adds up towards decryption of selected ciphers.

In order to decrypt an enemy's cipher, you have to accumulate your Decryption power until it reaches your opponent's Cryptology strength.

Starting Cryptology level is 0, which requires you to accumulate 12000 Decryption power.

Additionally, countries not at war suffer a 50% percent decryption penalty.

Cracked code provides you with following passive bonuses against the target country:

You can also reveal intel about the cracked codes to the enemy, which will grant you active bonuses on top of the passive ones for 30 days:

After 30 days opponent will change cipher and your decryption progress will be reset to 50%.

Once you have upgraded your agency at least 3 times, are independent or a Dominion, and you are a part of a faction, you can choose to invest 50