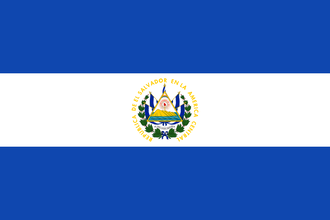 Fascist nation with elections every 4 years and the next one being at January 1939.

El Salvador is guaranteed by the

美利坚合众国 via Monroe Doctrine. El Salvador may form the

中美洲合众国 if it controls all other independent Central American countries excluding

巴拿马. Doing so will give it cores on the required territories plus British Mexico (311).

Industry
El Salvador has 2 Civilian Factories and 1 Military Factory in the state of El Salvador. It has 1 more building slot.

El Salvador has a small military.

Army
Their Infantry has 3 units.

Even though the country is small, the industry is tiny the manpower is tiny and it has basically has only chronium, it is the only fascist country in central america. Thus, it'll be the most likely to form a Central American Union.

The first thing would be to go after political effort, and justify on Guatemala in the meantime. After the political effort, go with collectiveness ethos, and then go right as this will lead to militarism and military youth ideas, these focuses combined will give 7.00% of recruitable population. Meanwhile, after declaring war at Guatemala, begin justifying Honduras. After annexing all the rest of the countries of central america, form the Central America by decision, this will be roughly the same population and resources as Nepal.

As Central America, its biggest threat is Mexico, since its focus tree allows Mexico to gain wargoals against Central America. However, a well-led Central American Army can lead to the end of Mexico. It's up to the player whether to puppet for manpower or straight up annex for resources. Justifying on the United States should not be advised as at that point, the United States would be strong enough to stop any offensive by the time a wargoal has been finished justified. Therefore, it's better to continue offensives into South America, which requires you to have a navy. With these South American nations annexed or puppeted (either by mass, as in the case for nations weaker than Colombia; or by bold encirclements, as in the case for Venezuela). Central America, by this point, should have enough manpower for several 24 divisions of 20 width 7/2, some garrisons to prevent naval bridgeheads and a decent detterence to enemy air superiority. Should Central America wish not to invade the United States, it should begin expanding its navy.